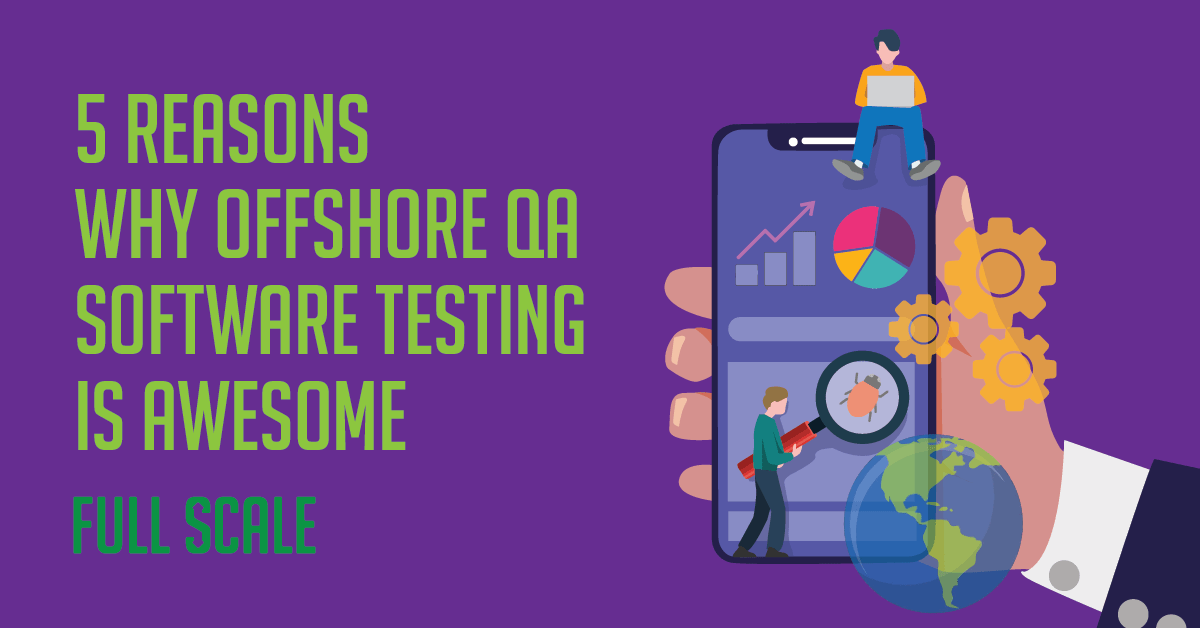 Offshoring is the process of building a remote team in a country abroad. You can do this by hiring services from an offshore software development partner company. Depending on the type of services they offer, offshoring brings more benefits to you as an organization.

Software testing should be a necessary process in software development. But many often think that software developers can fix and detect their own errors and bugs. Rather than work on the next set of tasks, they have to go through the QA process themselves.

The thing is software developers should focus on development tasks. While they test their code, quality assurance is not their primary responsibility. Moreover, they might get defensive when evaluating their own work. This often leaves issues unacknowledged.

To avoid mistakes and significant losses in users and money, you should hire QA testers to handle the QA activities.

QA testing ensures to unravel all bugs, errors, or defects before you launch a software product. This step is crucial as it influences the quality of the software. Let’s check out the top five reasons why you should offshore QA.

Software bugs can appear as a flaw in the UX/UI or fatal errors that cause the program to crash. These bugs can also lead to data loss and limit the productivity of any user. Through testing advancements, it has become much easier to fix these problems. However, this doesn’t stop bugs from showing up out of nowhere.

It is important to minimize errors in software development. By having highly skilled QA testers in your offshore software team, you will be able to find and fix mistakes right away.

You can also predict end-user behavior that might cause such errors. Without QA testing, the software might not work as expected, which will cause a bad user experience.

QA testers make sure that the software meets the functional and non-functional requirements needed before it is launched. Suppose you are in the business of selling software products or using them within the organization.

Either way, you have the confidence that your software generates a smooth user experience. This helps increase customer satisfaction and loyalty.

One way that you can take advantage of offshore testing is to maximize time zone differences. When working with an offshore team, you can have them work in the same hours as their onshore counterparts.

You can also create a schedule where onshore and offshore team working hours overlap. Maximize the 9 to 13-hour difference. Once the onshore team is done for the day, your offshore team can continue where they left off.

Doing so creates a continuous workflow between teams, thereby increasing productivity and efficiency at the same time.

Another benefit when working with offshore teams is that whenever there are unexpected changes during a sprint, offshore QA teams have the flexibility to respond to them quickly. Communicate to the team what needs to be done and make adjustments where necessary.

When you hire offshore, the rates are significantly lower than onshore rates. The five factors that affect rates are:

Being familiar with these factors helps you determine where you would hire offshore QA testers. One should not make compromises between quality work with low salary rates. Remember, different countries have different rates, so it is essential to do your research.

The costs of building software can be expensive. Having access to an offshore team helps you save a significant amount of money that you can use to run your business. For example, building a software team in the Philippines allows you to do that.

In the Philippines, where the Full Scale offshore office is, Business Insider reports an oversupply of tech graduates by 2025. This is good news as it will help solve the global IT talent shortage. At Full Scale, we help you look for the best software talent to fit your needs.

With cultural variety, you gain new perspectives on how the software program works to handle errors effectively. A good QA specialist must give valuable insights on product weaknesses and how to improve them. One must foresee potential risks and behavioral impacts of the software product without personal biases.

Working with third-party QA testing companies helps maintain objectivity that will improve the overall quality of your software product. How? When one team works on development and testing, there is a big possibility that errors or bugs get ignored.

Your QA testing team must be able to make critical evaluation decisions. Offshore QA teams help you achieve that. Pursuing this vital process in software development will help you avoid problems once you launch your software product.

Working with specialists in a specific field makes the work more manageable. You gain confidence that your software product will work with the help of skilled developers and QA engineers.

The QA team helps the product owner to make sure that all client requirements are met. With that, you can be sure that once the software is done, it has gone through a reasonable amount of testing, thus increasing productivity.

All the reasons stated above give you an overview of how offshore QA testing can help you. It is inevitable that as your company grows, your technical needs and requirements also follow.

Maximizing the time differences between onshore and offshore teams for a team with a tight production schedule helps fix that. Offshore QA testing helps minimize disruption in the software development phase.

By hiring an offshore QA team, you avoid big accidents that may damage your brand. Here are some examples of the adverse effects of software bugs and crashes:

The Disassembly of the Mars Climate Orbiter

The Mars Climate Orbiter was supposed to be the first satellite to monitor the weather of the designated planet. On September 23, 1999, the orbiter was positioned behind Mars, preparing for its quick descent into the planet’s atmosphere.

Once the rocket goes back into orbit, the orbiter should report to ground control all the data, including photographs. But the craft was not positioned in the correct trajectory. Instead, it had burned up inside the Martian atmosphere 24 hours earlier.

The software supplied by Lockheed Martin was one of the most significant contributing factors to the unfortunate disassembly of the Mars Orbiter.

The software had a bug where it calculated values in imperial units, pounds-seconds. However, the NASA software was designed to expect value in the metric unit, newton-seconds.

Since the values were not correctly converted, it caused minor discrepancies in the position of the craft.

Another error found was that NASA heavily relied on email notifications to confirm the spacecraft was in orbit. They did calculations manually because the supplied software had bugs and errors at the time.

This minor lapse caused a $125 million spacecraft to drift too close to Mars’ surface while attempting to stabilize its orbit. The space mission could have been successful if the errors were fixed before the flight.

NASA then included better training operations, ownership, and a process to audit software before flight maneuvers were strongly recommended.

It wasn’t a mechanical failure or sabotage on the part of its engineers. Instead, the computer got overwhelmed by numbers that were way bigger than it expected. They used the same software as the Ariane 4, but the Ariane 5 had bigger and faster engines.

The software captured a high reading for the sideways velocity that is impossible to store in the computer system and caused the malfunction. The software was forcing a 64-bit integer into a 16-bit space. This resulted in having both the primary and backup computers crash, resulting in the rocket’s demise,

The Ariane 5 was estimated to cost around 8 billion dollars to develop. This does not include the $500 million satellites it was carrying during its explosion.

You might have already watched Psy’s iconic Gangnam Style music video. The song became a worldwide hit after its release in 2012 that it had over 2.15 billion views which nearly resulted in a YouTube glitch.

Nobody would have thought that a video would reach over 2 billion views. That’s why the engineers previously used a 32-bit integer which puts the maximum number of views to 2,147,483,647.

Currently, YouTube uses a 64-bit integer for the view counter, which brings the maximum count to 9.22 quintillion.

Though this is not as disastrous as the Ariane 5 bug, it is important to note that not including software testing in the development process will entail consequences.

The unexpected errors and bugs will either impact the user experience or cause accidents and massive financial losses. Putting together a QA team is a smart way to avoid problems that will highly affect your business.

You shouldn’t compromise quality just because you have to meet deadlines. Having an offshore QA testing team means creating a valuable core team in the software development process. That is why you should choose a partner dedicated to making sure they contribute to your success.

Offshore software companies ensure to keep up with the necessary skills required for a task. It is best to choose an offshore company that nurtures its employees by providing them with continuous learning. Full Scale does exactly that.

At Full Scale, we don’t shy away from helping our clients succeed. We support clients who want to develop software products for their customers or organization. Since we want the best for our clients, we only hire the best developers and QA testers in the industry.

Our rigorous hiring process assesses the skills level and expertise of the people we hire. We assign the right people to the right projects giving them opportunities to learn and advance in their careers.

Success is part of our workforce and we hustle to reach it. You cannot find that kind of commitment anywhere else. Talk to us to learn more about the amazing work we do and how we can help you succeed.