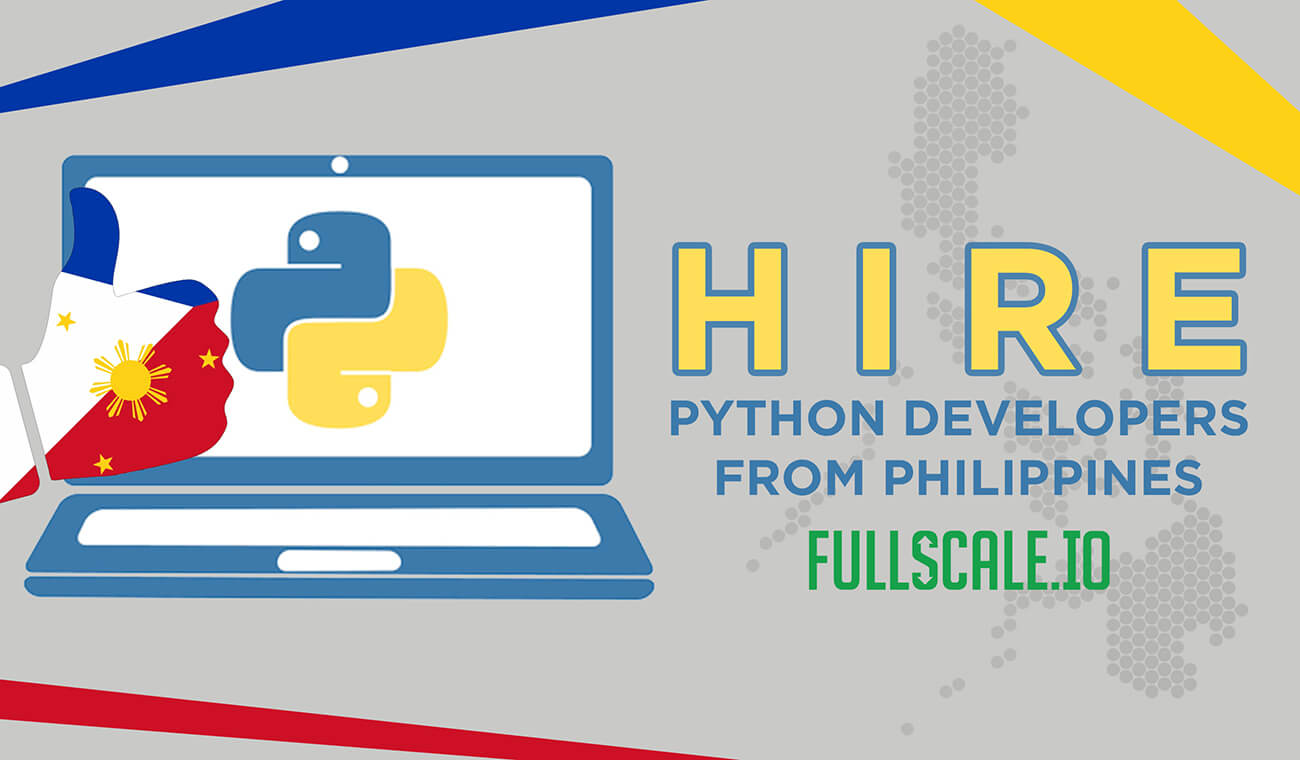 Why Hire Python Developers in the Philippines?

We’ll help you answer those questions so you can make a better-informed decision in your quest to hire the best Python developers in the Philippines.

How to hire Python developers from Full Scale

When you want to hire Python developers from us at Full Scale, just follow these simple steps in hiring:

As you can see, it only takes four simple steps to build your software development team. So contact us for more information on how we can help your business grow!

What does a Python developer do?

A Python developer is responsible for developing, creating and testing the applications powered by Python–a general-purpose programming language with a design philosophy that emphasizes readability. Python is used for many applications but its popular applications are web development, data science (data analysis, machine learning, and data visualization), scripting, and also heavily used in automation, data processing, data mining, and AI.

The following are a Python developer’s major job responsibilities:

Do not remove the video below, this is for AMP

How to find and hire Filipino Python developers

When you’ve decided to hire Python developers from the Philippines, the next step is discovering where and how you can find these developers. The main sources where you can find and hire developers are online job portals and job boards, developer communities, social media sites, and enlisting the services of job placement firms or recruitment agencies.

What happens when you employ the services of a job placement firm? You pay for the services of these firms to screen, test and refer applicants to you. But a key disadvantage is that since you barely have control of the applicant screening and testing processes, there is no guarantee that the applicants referred to you will pass the standards that you are looking for.

However, searching through online sources can be a time-consuming and tedious process. There are also situations where you find applicants with impressive qualifications in their online resumes, they undergo your technical exams, and then their test results do not commensurate to their written qualifications. You may end up feeling frustrated for wasting time and effort when that situation happens.

Why should you hire Python developers in the Philippines?

The extensive skills and lower rates are the main reasons why you should hire Python developers in the Philippines. Let’s discuss these reasons more in-depth.

The Philippines has a rich pool of IT graduates with a total of 86,934 engineering and technology graduates, and 86,933 information technology graduates in 2017-2018. Many of these graduates take three to four months of internships in IT companies to gain actual practical industry skills that would later make them employable. It is in these workplace settings that Python developers gain valuable technical and non-technical skills.

Most Filipino Python developers start out as junior developers, eager to acquire new and additional skills and experience. Eventually, they move and become intermediate or advanced developers. Consequently, they become proficient in commonly used Python web frameworks of Django and Flask, and in other programming languages such as C#, Java, JavaScript, and PHP.

Many Filipino Python developers are also proficient in Selenium – a portable web testing framework that supports Python. Additionally, they are skilled in Bootstrap (CSS framework), jQuery (JavaScript library), and SQL. They are also adept in non-technical skills such as problem-solving, critical thinking, adaptability, and empathy. They continuously learn by taking short-term courses and getting regular guidance from their peers or superiors. These non-technical skills are important for Python developers because they work in team-oriented environments interacting with other developers, team leaders, clients, and company founders. Their extensive work experience also means they have participated in a wide variety of software development projects that have further sharpened their skills and knowledge.

English proficiency and positive cultural traits are two other reasons why you should hire Filipino Python developers. These reasons are inherently prevalent in Philippine society because the country was an American colony for almost 50 years, and the culture has become an amalgamation of traditional and Western cultures. The Philippines is one of the most English-proficient countries in Asia with a 2018 EF English Proficiency Index score of 61.84 and rank #14 among 88 countries tested worldwide.

Positive Filipino cultural traits include a strong work ethic, adaptability, creativity, resourcefulness, and resilience. The Filipinos’ hard-working nature means they usually won’t leave from their work until their daily tasks are done. They can adapt to a new working environment in a short period of time and are resilient enough to work well under pressure. Filipinos are known for their creativity and resourcefulness and their out-of-the-box thinking when they have to come up with solutions for complicated problems.

The combination of technical and non-technical skills, English language proficiency, positive cultural traits, and cheap rates have made Filipino Python developers high in demand within the IT industry job market.

Another good option for you to hire Python developers from the Philippines is offshoring them from Full Scale–one of the leading offshore services companies in Cebu City, Philippines. With offshoring, you don’t have to undergo the exhausting and expensive process of building a team of developers from scratch on your own, we do that for you!

We have the Python developers that you need and want

Full Scale only hires developers who are in the top tier in terms of skill and experience level. Our current Python developers have intermediate (two to three years) to advanced (four years or more) levels of experience, and they have participated in many Python development projects prior to joining us.

They are proficient in Web Python Frameworks like Selenium (Framework for testing web applications), Web2py, Django, and Flask (Frameworks for Web Application Development). They usually combine these with other frameworks like Bootstrap (CSS Framework), jQuery, React.js, and Vue.js (Javascript Frameworks). Some of them also have skills in relational database management systems (MySQL and PostgreSQL), NoSQL (MongoDB), and in other programming languages like C#, Java, JavaScript, and PHP..