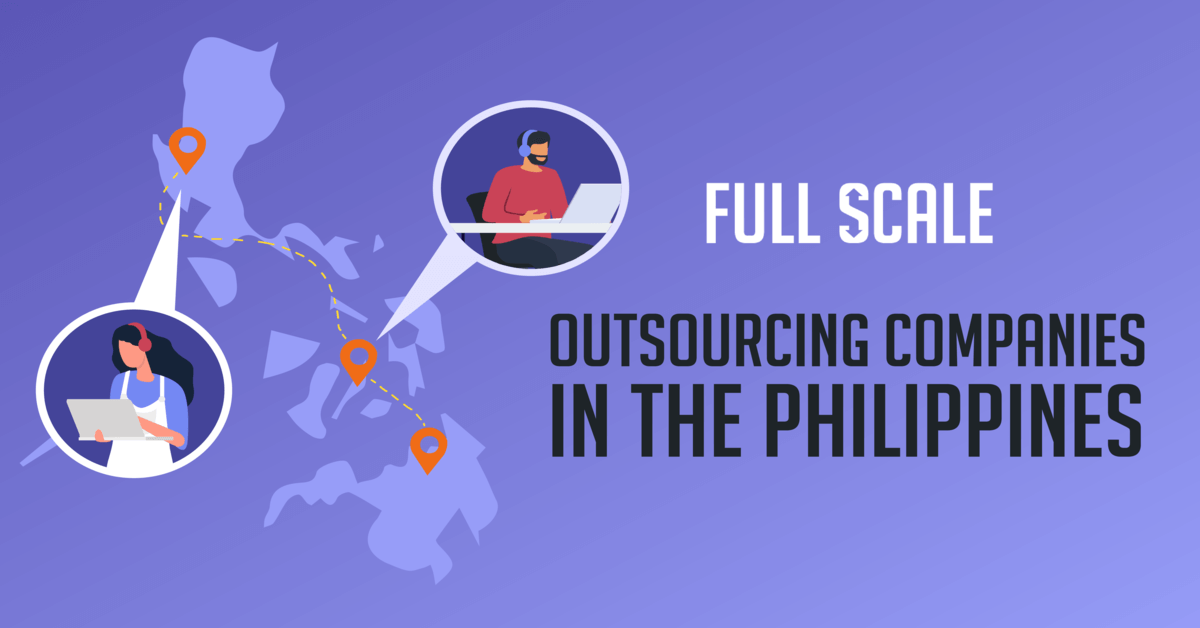 Top 6 BPO Companies in the Philippines

The Philippines is one of the top outsourcing destinations in Asia. Throughout the years, it has gradually turned into a primary talent pool to draw from. Several firms from the US, Australia, Europe, and Asia have outsourced parts of their operation in the country. This has caused a major boom in its economy. Today, it’s ranked as one of the top digital nations in the world.

However, the country’s winning streak didn’t build up overnight. In fact, it went through several phases. How did the Philippines go from an unassuming country into a globally recognized human capital?

Business Process Outsourcing in the Philippines

To get a clearer narrative of the Philippines’ outsourcing, let’s define the concept of business process outsourcing.

Business process outsourcing is the practice of delegating company work to a third-party service provider or contractor. A company can outsource a single or multiple parts of its operations to cut down on cost and increase efficiency. This business model is designed to help businesses develop their core competencies by transferring menial tasks.

The outsourcing trend reached the Philippines’ shores in 1997. Sykes was the first multinational company that outsource its operation in the Philippines. Then, several other international companies opened in the country. And to further entice investors, the government passed attractive tax incentive laws.

Afterward, foreign investors were flocking to the Philippines to outsource their business processes. With so many benefits from outsourcing in the Philippines, it turned into an ideal place for business. By 2010, the economic growth was unstoppable. Nonetheless, the market is volatile and encounters its fair share of challenges even today.

Despite the COVID-19 economic devastation, the Philippines outsourcing industry thrives. In fact, the BPO industry produced $26.7 billion in export revenue in 2020. And that is projected to reach $29 billion by 2022. In conclusion, there’s really no stopping the demand for business outsourcing.

Best Outsourcing Companies in the Philippines

Now that we know the industry trends, let’s get to know the outsourcing companies in the Philippines. The most notable BPO companies are in the telecommunications and Information Technology (IT) industry.

So, here are some of the longest-running and most profitable BPO companies:

First, we have the trailblazer. As mentioned, Sykes pioneers the BPO trend in the Philippines. This American-owned BPO company established its first call center in Manila in 1997. Additionally, it was also the first to branch out of the capital city, opening another call center in Cebu.

Sykes offers various BPO services such as technical support and customer service. Today, it employs over 15000 Filipinos. It’s now one of the largest telecommunication companies in the country.

Secondly, we have another telco giant and a pioneer in the industry. Teleperformance initially opened its contact center in the Philippines. It rapidly grew its base and became a forerunner in offering offshore business solutions.

The corporation now employs over 45,000 individuals in the Philippines. It has over 30,000 workstations spread over 22 corporate sites. These branches are in Metro Manila, Antipolo, Baguio, Bacolod, Cebu, Cagayan de Oro, and Davao.

Convergys was also one of the first BPO companies in the Philippines. It started its operations in 2003. Just like Sykes, it also branched out from Manila to another developing BPO hub, Cebu. Today, it still ranks high among the call centers in the country.

In 2016, Convergys was acquired by a global business services company, Concentrix. The company specializes in customer engagement and caters to several industries. Now, it employs more than 20,000 staff in Manila and other provinces.

Amazon is one of the fairly new players in the Philippines outsourcing industry. It opened its first customer service center in 2018. The branch operates in Cebu, and in its first year created over 300 new jobs in the city.

The Philippines site of the e-commerce giant serves Amazon customers in North America and the United Kingdom. It is Amazon’s first customer service center in the Philippines. And just recently, it also built its first AWS outpost.

Next, we’ll move on to the more technical industries. Accenture is another leading BPO firm that specializes in IT services and consultation. This firm offers consulting, strategy, technology, and operational services.

Today, Accenture employs over 50,000 employees across large cities like Manila, Cebu, and Ilocos. The company has received many awards and accolades for its social and philanthropic efforts. In addition, it’s highly favored as a “great place to work for” by Filipinos.

Lastly, we have IBM. IBM Solutions Delivery Inc. is the Philippines leg of the American multinational technology corporation. The headquarters is in Quezon City. It specializes in Computer Systems Design and other IT-related services. This massive tech firm creates and produces hardware and software solutions. Furthermore, it also provides cloud computing and AI services.

Overall, the above-mentioned companies are just a few of the top BPO companies in the Philippines. With such a rich outsourcing industry, it’s undeniable that the nation is an investor favorite. Hence, it’s bound to grow even more in the future.

Do you want to outsource a business process to the Philippines? You’ll need to work with a company that knows how the local market works.

Full Scale is a software development outsourcing firm that offers a wide range of business services. We help companies improve and scale their operations. From consulting to recruiting to management, we provide a comprehensive variety of services.

Our mission is to match businesses with qualified specialists for their software development projects. We vet the most seasoned experts. Similarly, we want our experts to work with awesome clients. We also want them to work on the most innovative project.

So, ready to take your business to the next level? Let’s talk!